Words from The Good Fairy of the North

Recently I was alarmed to read a story of an Australian gay couple. I sadly cannot locate the story now but it highlights a part of why Marriage is so important.

The couple (Let’s call them Jack and John, the story mentioned no names) had been together for a number of years.  Eventually, Jack passed away, dying of cancer.  The story goes on to say that within 24 hours of his partner’s demise, John was served with papers asking him to vacate their home.  He was permitted to hold a memorial, but was told in no uncertain terms that he was not to attend the funeral, held in the family’s home state.  Jack’s body was taken away, and the family ignored that John ever had a part in his life, let alone being his partner.

It’s a sad story. I can’t tell you for sure whether this specific version of it has happened here in Australia.  But it’s hardly a unique story – Something very similar happened in America

This is not something that you hear of happening to married couples.  It doesn’t happen to wives, nor to husbands.  There’s this thing called “senior next of kin” which is one of the few things that de facto status does not grant.

According to the State Library of New South Wales,

‘Next of kin’ can therefore include lesbian and gay partners. Despite this, if a person in a same-sex relationship dies without leaving a will, their partner’s wishes may be ignored by the family unless the partner can establish that a de facto relationship existed. This can be an important issue for a lesbian or gay person who may want their partner rather than their family to control the funeral arrangements. For this reason, it is especially important for lesbian and gay people to make their wishes clear in a will. Even then the executor is not bound by the directions left in the will. Disputes over ownership of the body or decisions about funeral arrangements are referred to the Supreme Court for hearing. Costs are met by the disputing parties.

Let me break this down: I could be in a loving relationship with a man for 40 years, I could die (I’m selfish, I’d rather be the first to go), having done everything I could legally, and the only way I can ensure that my partner has the right to do with my remains what he believes I would want (which in the course of 40 years, I’ve probably discussed at least once) is to make him the executor of my will – and even this can be challenged. I, fortunately, have a wonderful family and I can’t imagine them doing this to anyone. I know not everyone is so lucky…

Is this a question that straight people contemplate? I don’t think so.  I’ve heard a few people concerned about what will happen to them when they die – which is why they talk to their husbands or wives – but not about whether their family will let their husband/wife *do* what they’re asked to.

Marriage cements the next-of-kin bond and being both senior next-of-kin and executor is much more difficult to challenge.

Join with me and fight for this important right, to name our partners as our next-of-kin

Stand with me at Queen’s Park at 1PM on the 18th of May – and remember to go to the Facebook event for the Rally for Marriage Equality Brisbane and let us know that you’re going, invite your friends, tweet it, post it on your uni campus, and put it on your workplace notice-board.  Get the word out that it’s happening. The more people who show, the bigger the push for Parliament to pass it. 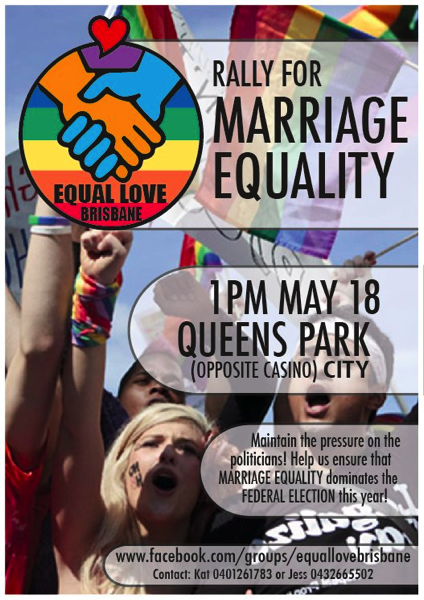 Well, I’ve been really slack on this eThankfulness thing, as my dad reminded me recently.  For those of you who are new to this segment, it’s a time where I reflect on the things big and small that I am thankful for.  It’s something I find puts life in perspective and helps me (and hopefully others) see that there are positive things going on in their lives.

So what am I thankful for since last time?

I have a job – I’m even a permanent!  And for an organisation whose goal is to support those who need it.  I don’t normally give away massive clues to my identity like telling my readers who I work for – but right now my employer organisations (I work for a group of four) are doing fundraising by selling “The Entertainment Book” – about $65 gets you a book of vouchers for a bunch of 25% off for dining, cheap tickets to various things, regular deals, and more. and 20% of that money goes to the organisation you purchase it from – they even have books for different regions.  I have three choices for you:

I’m thankful in advance for your efforts on these.
I’m grateful for the fact that I have a house!  (I’m renting one) I’m very appreciative of having my own space.
I’m thankful for the fact that Gladstone is getting some queer services online and happening!  GLBTIQ Gladstone was just approached by Anna from PCYC, who is setting up a GLBTI youth group twice a month on thursdays from 4pm-5pm for under-24s!  For more information call Anna at Gladstone PCYC on 4972 3122
I’m thankful that I’ve been making friends in this town – not the least of whom are my fantastic now-ex housemates – I love you guys – and much as I love my space, I miss having you around to chatter about everything with!
I’m thankful that I seem to have landed on my feet in general, actually. This was an experiment that could have ended badly for me. But my luck held and I’m enjoying life in the city! And now? Time for sleep!

For the 6 weeks leading up to the Gladstone Marriage Equality Rally in November, I drove everybody (not least myself) insane with blogs, posts, tweets, messages, emails, phone calls, media releases, interviews and more about the Rally.

18th of May, 1PM, at Queens Park, will be Equal Love Brisbane’s Rally for Marriage Equality.

I’ve told you before why Marriage is important to me.

We’ve seen public opinion jump to an all-time-high approval rating for Marriage Equality, with even a majority of Christians in favour.

What we haven’t seen is a public push from the leaders of the political parties for Marriage Equality, with Abbott refusing to even grant a conscience vote on the issue, despite 74% of coalition supporters saying that he should, and with Gillard granting a conscience vote and then voting against the bill.

It’s time that the Federal Government took notice of the public and recognised that this nation is ready for Marriage Equality, and the nation is saying so loudly.

It’s time. It’s past time. This should be done already, and we shouldn’t need to talk about it any more…

So come march with me and the other organisers of Equal Love Brisbane at 1pm on the 18th of May at Queens Park. Join the FB Group, and join the Facebook Event too – the QR Code below will take you to the event page.  Get in touch with Jess or Kat and ask them how you can help out. Follow @EqualLoveBris on Twitter for updates about this and other rallies. Share the QR Code and the poster, and invite all your friends to come the the Brisbane Rally.

In this election year, lets remind Abbott and Gillard that the GLBTIQ Community do this thing called voting, and at 10% of the population, we’re a demographic with some political punch.  March with us.  Lend us your voice. Tell our leaders that you’re casting your vote for Marriage Equality this year!

I’ve been remiss in my blogging. I’ve been slightly busy organising a move, and, as with many new moves, my Internet access has been severely curtailed. I just so happen to be bad at remembering that my iDevices are Internet capable too. Ridiculous for a geek, but there it is…

And this is where I choose to reflect on the last few months and what they have taught me about why I value, why I want to be able to get married.

If you’ve been following me online for a while, you probably became aware that my New Year’s resolution for 2012 was to be living in Brisbane by New Year’s Eve 2012. I made it, just.

I’ve spent the time since I sold my house living in temporary living arrangements. They were places for me to live until a certain date or a certain event. So since mid-November I’ve been living in a state of flux. That’s four months of being uncertain what the next week will bring. A lot longer if you consider my house was on the market for 5 months…

I’ve always known that I’m a creature always looking to tie down my world and make it more stable. I’m not afraid of change, but I don’t typically go from a more stable to a less stable position. The decision to move to Brisbane is so far outside my usual behaviour, it still surprises me. What I didn’t realise was how much it really means to have a place I can consider my own. To have a space that is mine that is really *home*. I didn’t realise how important that was to having a world that feels stable. I know logically of course, that it’s important, but I’ve never really had an opportunity to get to grips with it on the emotional level until now.
Can I say it’s an experience I look forward to not repeating?

It’s this craving for stability that in part drives my desire for marriage. When you enter into marriage, there is an expectation, a belief, that this is it, that this is the one, that this is your relationship, entered into for life. It doesn’t always work out that way, but the idea is there. Marriage is, in part, about creating a sense of stability for the parties involved. And so that is, at least for me, a part of why I feel Marriage is important to me. It appeals to my craving to increase the sense of stability in my world.

As always, I like to hear your thoughts on this topic!
I hope to get back to my more regular writing schedule from now on!